Many years ago we were given an extensive archive of factory records relating to the last days of TR7 and TR8 development at Canley. Many thanks to Roy Ford (ex Triumph experimental) for saving these from the skip and preserving them.

The records basically consist of factory internal memos relating to the experimental fleet from October 1979, right up until the fleet was broken up, and disposed of in the summer of 1983.

They also consist of individual car disposal records which give a run down of specification, condition, and method of disposal. I have grouped these into three different folders comprising of 'normal' TR7 development cars, O Series engine development cars, and TR8's.

Then there is the engineering (experimental) fleet lists that give a snap shot of the cars on the fleet at various times during the four year period.

Finally there are comprehensive records of the legendary Measham Auction when the majority of the TR8 fleet was disposed of. These include the actual auction sale brochures with handwritten annotations made on the day of final price that each car made. There are also post auction records of the dealers who purchased the cars.

You may ask what became of the rest of the other none TR8 cars that were not disposed of at auction. It seems that all the O Series engine cars had their running gear removed prior to sale to those in the know at the factory. The 'normal' TR7's seemed to have been filtered out into the market through either in house sales to workers and family, or Triumph dealers.

For the purposes of this record the cars model (TR8 for instance) will be as described by the department. This usually bears no resemblance to the chassis number of a car which might indicate to those not in the know that they were originally intended to start life as something completely different. It seems that part finished cars were taken out of the production stream and finished in the experimental shop to the final model type. If Triumph called it a TR8, then its good enough for me, its a TR8 regardless of initial chassis number. A good proportion of the cars taken part built from the production lines appear to have been LHD, with RHD cars being relatively few and far between.

If you want to know about the TR7/8 chassis numbering system use this excellent resource;

OK starting in no particular order lets list those 36 TR8's that were sold at the BCA Measham auction. Actually it was auctions as they dribbled out on successive Friday auctions starting on the 7th August 1981, and ending on the 4th September 1981; 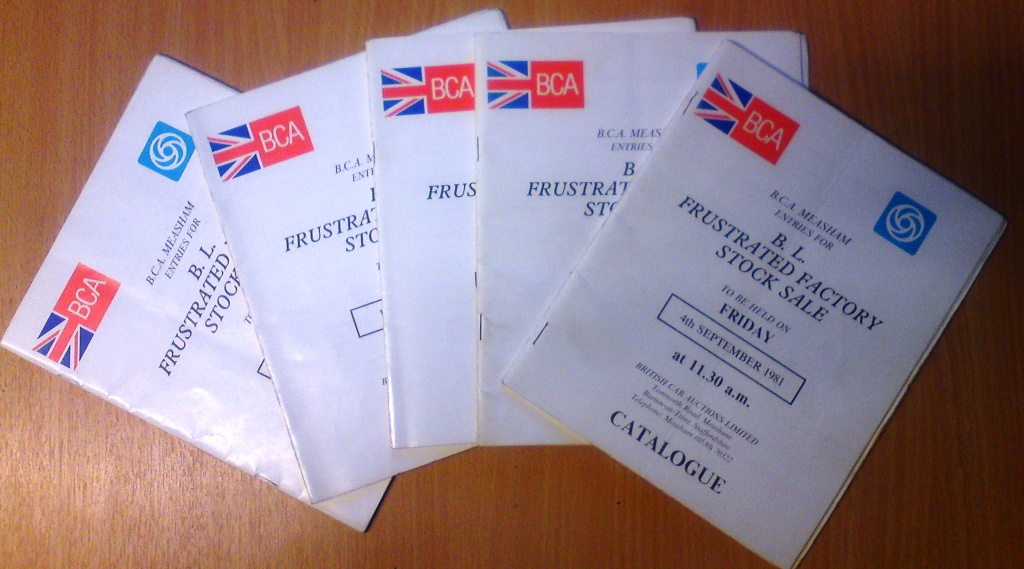 Right lets try and clear up some of those ambiguous Auction Lot descriptions scribbled down in the heat of the battle by our man from BL who was there on the day (days) keeping an eye on the proceedings.

So in the 7th August auction the first car noted as C51. This is the 'Engineering Reference Number' which with some simple cross reference with other records identifies it as LVC 358V, a Federal spec convertible, painted Triton, and noted as a general development car. The next car noted as '565' is KHP 565V, another Federal spec convertible in Silver, with 15,753 miles showing. Just prior to sale this car was noted as having a few minor trim items missing, and no aerial. Next is '988' which Jim Johnson kindly informs me could be NWK 988W, a car that does not appear anywhere in the fleet records. I'll come back to the unregistered cars later. Finally in this sale we have '606S' which is YRW 606S, a Brown Auto Coupe to Federal Spec, with 7,063 miles on the clock. Described as having minor body blemishes, and no boot trim.

On the 21st August sale we have '700T' which is EWK 700T a Inca Yellow LHD Coupe with 12,672 miles on it. It had undergone rigorous testing, including environmental chambers, and has numerous paint blemishes, minor panel damage, and trim items missing. Then we have '824V' which is JVC 824V a White Auto LHD convertible with Air Con. This has a experimental chassis number X919, and had 7,909 miles on it at disposal. Then we have 575V which is KHP 575V a red  convertible also bearing an experimental chassis number X924, and having 3,906 miles on it. Its noted as having numerous paint blemishes, and a torn hood.

Lets get back to those 16 unregistered cars. Hanging an identity on each car might be difficult as prior to the sale there wasn't that many unregistered cars listed as being at Canley. By default a good proportion of these must have been the limited 'production run' of RHD cars that BL filtered out at the end and as they weren't part of the development (experimental) fleet beyond the scope of this article. However one of the unregistered cars in the 28th sale is described as '4K cert' and as there were two cars listed as 4K certification in the pre sale disposal lists (4.8.81) it might be one of those. They are both listed as LHD convertibles, one Silver, and the other Gold. The Silver one was Auto, and had done 3,810 miles of testing, and the Manual Gold one 3,802 miles.

In amongst the Coventry registered cars in the sale theres a couple of interlopers with Birmingham registrations LOB 468X, and LOB 470X. As these don't appear anywhere in the Canley fleet lists one presumes that Solihull, or Longbridge also maintained a experimental fleet, just how many cars were there?

Rather than type it all in I have simply scanned in Roys post sale list identifing which dealers bought what; 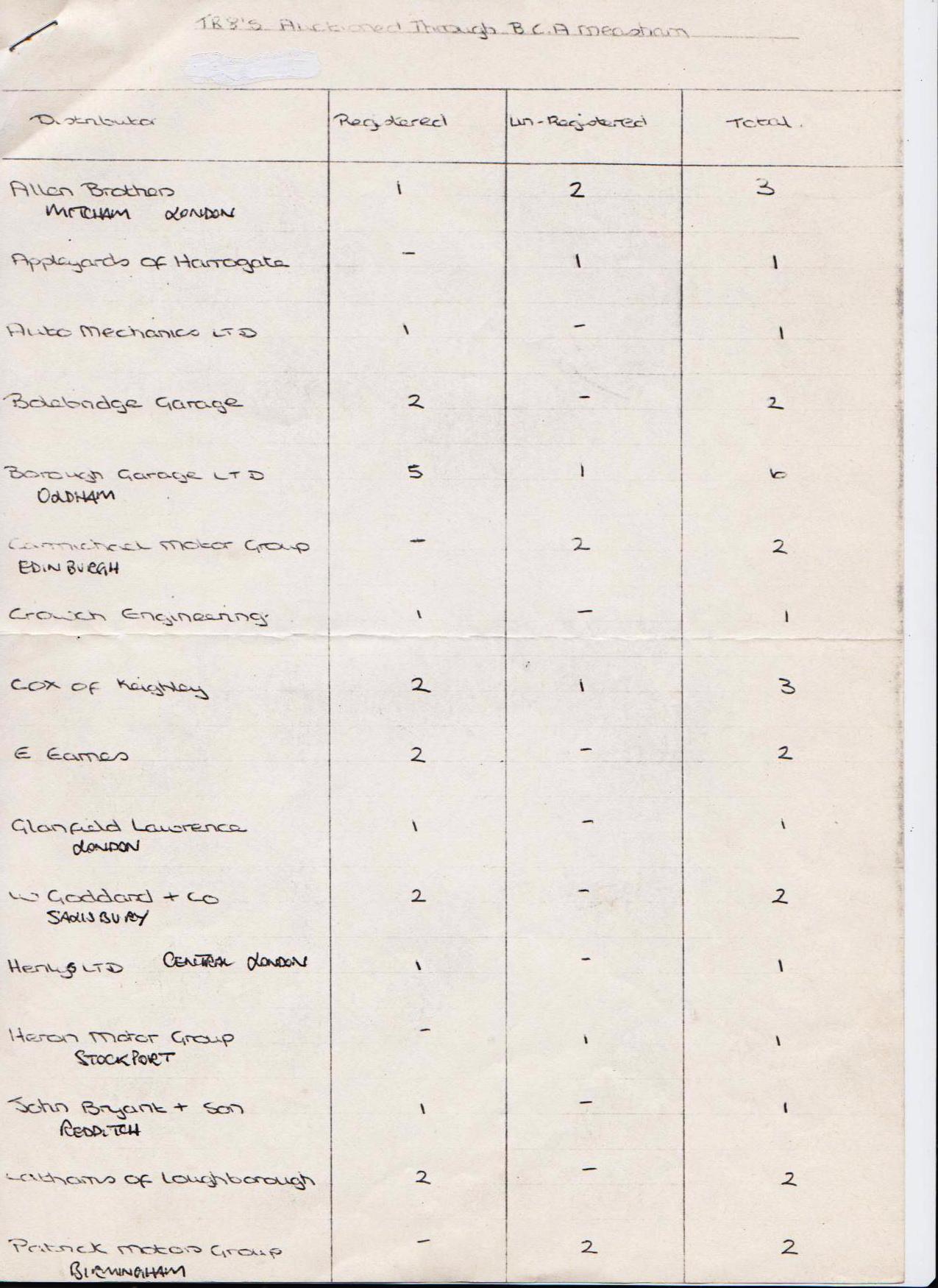 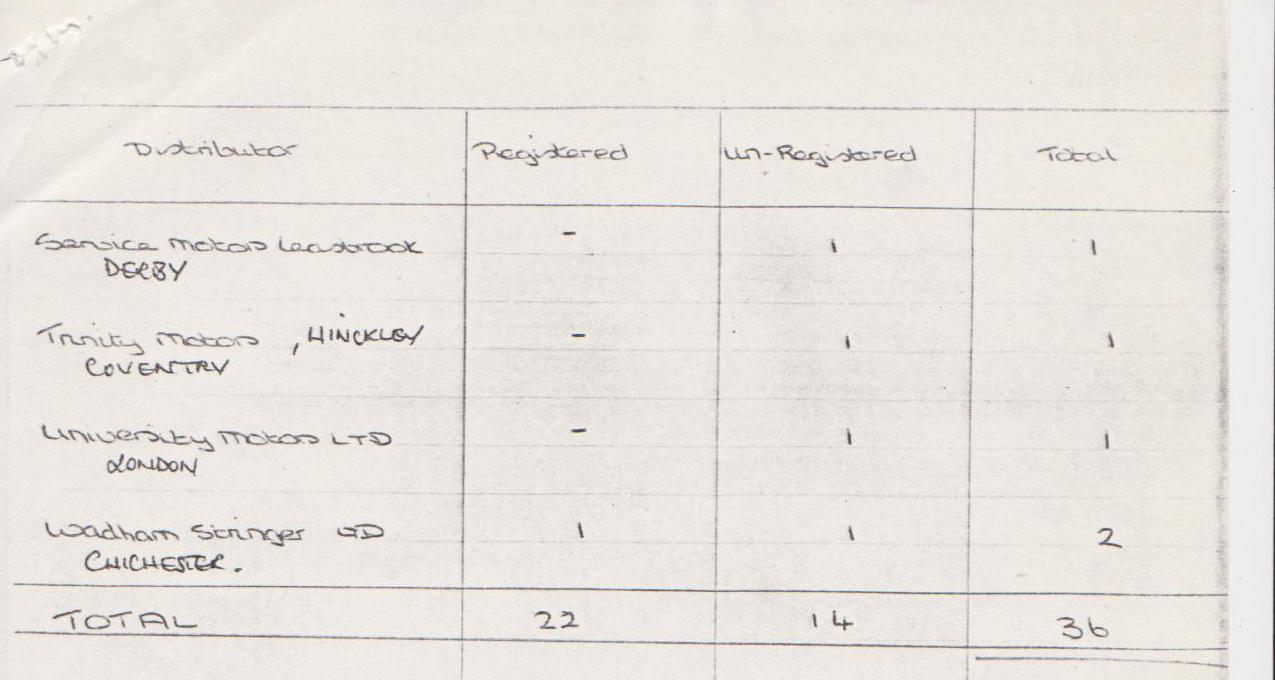 One more interesting thing gleaned from the auction catalogues is that in amongst all the dross (Allegro, Ital, Princess, etc) BL punted out over one hundred standard newly registered TR7's. They must have been registered on the same day roughly in the series KON 870W through KON 970W. BL finances must have been in a particularly parlous state in August 1981!

In this section I'm going to try and list every TR8 in reg plate suffix order (R, S, T, V, W, etc) that passed through the department. This will not include earlier cars (1973-1978) as I have no records for them, and turnover seems to have been fairly rapid. It will also not include the normal production TR8's, either LHD, or the rarer RHD.

Plus at least 10 un-registered cars.

This consisted of 25 cars of which 20 were fully built up driving vehicles, and 5 partially built cars.

This was BL's last ditch attempt to keep the TR7 viable. Rationalizing engines would have driven build cost down, and it also promised increased performance (the O Series TR7 Turbo car was faster than a 'tweaked' UK spec TR8).

If you want to know a bit more about the O Series engine try this excellent resource;

This was a serious project. With all thoughts of a 'Sprint' 16 valve TR7 long since buried by this stage (not a single 16 valve car was on the fleet at this time) and the 2 valve engine running out of development potential (although Saab managed it) Triumph (BL) needed a new engine for the TR7 sharpish.

That takes care of the twenty or so running cars. You might have noticed the high survival rate of cars that were supposedly scrapped in June 1981. In most cases I think the scrapping got no further than the removal of the running gear prior to sale. Having now checked the DVLA website on these survivors most of them appear to have been retro fitted with V8's. Whether this was done at the factory, or after sale to BL employees I'm not sure. I know one of the BL engineers who bought at least two of the above, one of which is still sat engineless in his workshop to this day having never moved since the day it was delivered! A good proportion of the survivors that started life as LHD cars now appear to have been converted to RHD. A couple of these cars that I have seen in the flesh bear no evidence of ever being LHD which leads me to suspect that there was a fair degree of bodyshell swapping going on in the department. Some of the cars seemed to have escaped less paperwork (log books) and then been utilised in the rebuilds of lesser TR7's. It should be a fairly easy job to trace these cars back to their correct identity bearing in mind the wide spread of colours, and specifications used in the fleet.

There were also at least 3 unregistered cars (all Convertibles) that were used in crash tests.

Someone on the TR Drivers Forum has enquired if any pictures exist of a TR7 engine bay with an O Series engine fitted. There are several excellent pictures in the BMH negative archive http://www.heritage-motor-centre.co.uk/archive-services/film-picture-library/ which I last saw over 10 years ago. As they aren't cheap to buy (even back then) I simply took a note of the reference numbers;

I'm not sure how it works with Heritage now when buying prints as its been many years since I last did any research in the archive, but use those reference numbers to order.

By far the largest group of experimental cars were the cars running slant 4 engines. They were used in a multitude of development programs, anything from air con (A/C) development, through emissions work, and fuel injection fitment. Where indicated in the disposal records I'll include a brief note as to each cars purpose on the fleet.

To save repeating myself most of the cars seemed to have had a hard life. The majority are listed as having panel damage, and, or paint blemises. In some cases 'tatty trim', and various parts missing are also noted prior to disposal.

Plus there were at least 12 other unregistered cars. With 10 of these cars having accrued mileages of between 5, and 122 I think its safe to assume they were spares that  didn't get used. The other two were a Black car showing 1,909 miles, and listed as being used for emission development, and a Brown Auto car with 4,765 miles showing having been used for 4,000 mile certification.

What was left at Canley after August 1981?

The much reduced fleet was now being administered through Longbridge, and was described thus ' North American Mothball Vehicles', stored against future possible 'Litigation Purposes'.

It appears that EAC 610T a LHD 2 valve TR7 was still being used for litigation work until the end of September 1981 when its tax disc was to be surrendered.

There followed an internal memo of 15.9.81 between Canley, and Longbridge asking for a number of scrap development cars to be transported to Longbridge for disposal.

This left the following stored in the basement of 40 shop at Canley.

One presumes that from this store came the Broadside now with Heritage. The only TR8 in store that was registered apparently didn't survive, and I have no way of checking on the two un-registered cars.

Nearly a year goes by and one final memo is passed between Longbridge and Canley on the 27.5.1983. Its apparent that at this time all traces of the TR7/8 development cars are long gone from Canley because the memo is simply chasing up the sales records of 5 cars sold back in 1981.

So that concludes this article. Thanks again to Roy Ford for saving this important part of Triumphs later history.