It had always been my intention to remove the wheel arch extensions it gained sometime in the 1980's when it was still in the USA.

At the same time I wanted to restore the hump on the rear deck to something like its original profile, and size. The original hump had been removed by Kas Kastner in 1966/7 to comply with the regs for the series he was racing in. During a restoration in the 80's a hump was reinstalled. It was a nice job, but it was overly large, and slightly the wrong shape.

After consulting with the original pattern maker at the Triumph (David Lloyd) who produced the Macau's rear deck and hump when the car was built in 1965 I thought it was time to bite the bullet and tackle the job. We carefully removed the 1980's aluminium hump from the glassfibre deck to reveal the shadow of the orginal hump still visible in the deck where Kas had removed it and glassed over it all those years ago. This helped considerably as now we knew exactly the plan profile, and shape. A hump buck was produced using this, and Davids guidance, and the many pictures I have accumulated over the years of the car. From this buck we (thanks James) layed up a mould, and then used the mould to make a new hump. It was then a simple matter of dropping the new hump into the deck, and bonding it in with matting and resin.

As it turns out the hump is now roughly a third smaller in height, and width than the alloy 1980's version, and I am very happy with the result. 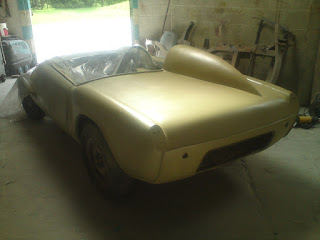 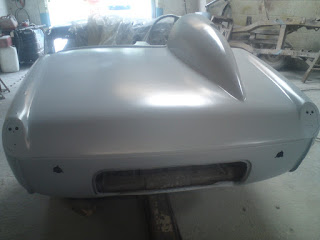 Followed by a couple of coats of high build.

As a result of bare metaling (actually bare aluminium'ing, and bare glassfibre'ing) the rear end prior to primer I now have a time line of the cars history through its previous owners. Its paint prep at the Triumph was interesting, and quite specific. This was confirmed with some recent work we have done on ADU 4B.

If you should ever get offered a works Spitfire I would be happy to offer my services as an originallity inspector having gained a unique insight into how these things were put together. Learning the many foibles, and nuances of these cars right down to the bare metal so to speak has been an interesting journey, and the more I get into them, the more I get to realise just how different they are to the myriad of replicas that have sprouted up over the years.